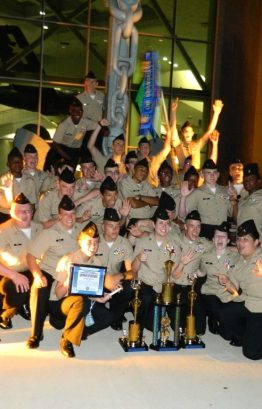 We adhere to all COVID-19 restrictions with all of our teams while practicing.

In the case where sub-zero temperatures is the only hazard that delays the start of school we will have practice as regularly scheduled.  This is because the cadets do not have to face the hazard of standing at a bus stop.  If school is cancelled due to the cold, practice will be cancelled as well.

When the hazard is freezing rain and/or snow, we will postpone practice until 0630 to give the school district a chance to cancel or delay school, if needed.  If there is a delay or cancellation of school there will be no practice.  This is to ensure cadets and parents are not out on the roads driving in what could be unsafe conditions.

So, if the news issues a Winter Storm Watch or Warning for either condition above please follow the guidelines as stated.  We will do our best, from school, to let the cadets know when there is a potential for a Winter Storm Warning or Watch.  We will also post the status of practice on the Northmont NJROTC Facebook page and use the One-Call-Now system to update practice status.

What Is Drill?
According to the NJROTC Drill Manual, drill is defined as:
The purpose of drill is:

But what about drill is so appealing to cadets in a high school setting?

Drill is a large part of the Northmont NJROTC program. We take great pride in the training and execution of drill as a time-honored military tradition. In class, cadets learn to march in formations and to perform numerous maneuvering techniques in an orderly and timely fashion. But the basic drill taught in class gives only a glimpse of the marching talent at Northmont High School.

NJROTC has an extracurricular aspect also. This is composed of our Drill, Athletic, Academic, Orienteering, and Air Rifle Teams. Why be a part of our extracurricular program? The experience! The chance to travel around in our area (spanning from West Virginia to Minnesota) and compete against some of the top teams in the Midwest. The opportunity to be a member of a highly competitive group of cadets who are known throughout not only our community, but also the nation.
Our Drill Teams compete in a multi-state area competition and have won first place 5 of the last 6 years. This ranking has allowed us to compete nationally against many other programs that have tough drill teams and disciplined cadets. And we’re right there with them! Our drill teams have placed as high as 4th nationally, and we plan to exceed this goal in future years at Navy Nationals. We’ve even been asked to do drill demonstrations for Military Honors Night at the Dayton Dragons Game!
So you understand the game we play and how hard we work, but you’d like to know more….? Here are detailed descriptions of our Drill Teams:
Unarmed IDR:
IDR stands for Individual Drill Routine. IDR is the base of all our marching teams. In Unarmed IDR we march a platoon of 12 cadets and 1 commander. This platoon marches with intensity and precision through the gyms of Northmont, as well as our competitors’ drill decks.  They march with flawless alignment and cover so you hear only “one team, one sound.”
Armed IDR:
Armed IDR gives cadets the chance to march IDR with the addition of de-militarized M1 Garands.  Marching with rifles is more advanced marching and requires strict focus and concentration. Cadets execute precise marching movements as well as rifle motions like Right Shoulder Arms and Present Arms.
Unarmed Exhibition:
A freestyle drill team in which cadets march complex routines choreographed by the cadet commander. The team members memorize all the movements for a 9-minute drill routine with advanced marching maneuvers, ripples, rapid hand motions, and difficult stomp sequences, all while varying the rhythm and cadence.  The team marches into shapes and formations and then come back together as standard platoon in an effort to impress the judges with their precise military execution and the routines difficulty.
Armed Exhibition:
A freestyle drill team in which cadets march complex drill routines while carrying rifles. During the routine, cadets spin, flip, toss, and catch 9-pound Springfield drill rifles. They march around the drill deck, executing precise basic rifle movements as well as creative freestyle spins and rifle stomps. The routine is designed by the commander and participating cadets. Recently, the armed exhibition team performed a drill demonstration between innings at a Dayton Dragons baseball game.
*Both exhibition teams are exciting to watch and be a part of at drill meets because it is a chance for us to see what other schools have designed, as well as show them what we’ve created.
Color Guard:
The role of a Color Guard team is more ceremonial than that of a drill team. One cadet carries our national colors, another carries our Navy flag, and the remaining two members carry rifles on either side of the flags. Every NJROTC must have a Color Guard to represent their units both in competition, and in their community. Color guard teams present the colors at many of Northmont’s athletic events as well as at important events in the community, including Mayors’ Breakfast, Rotary meetings, festivals, Homearama, parades and other civic celebrations. Color Guard is the oldest and most traditional of all the drill teams.